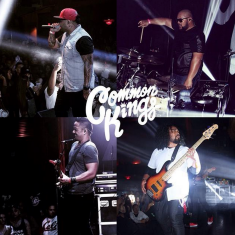 The Kings will be on tour Spring 2015

The Kings chilling with Justin Timberlake

*Photos provided by and courtesy of Common Kings

The American reggae movement is the strongest it has ever been in history.  With many successful artists and bands like SOJA, J Boog, The Green and Rebelution selling out venues every year, reggae is surely gaining prominence.  One band in particular ranks very high with their contemporaries … The Common Kings.

These Kings are no strangers to the reggae scene.  Junyer (lead vocals), Ivan (bass), Rome (drums) and Mata (guitar) formed four years ago at a jam session and have since released a plethora of hit singles, including “No Other Love” (featuring J Boog & Fiji), “Fly”, “Alcoholic”, “Wade in Your Water”, “Your Turn”, “Before You Go” and more.  The Common Kings blend reggae, R&B, soul, island, pop and rock into an original, eclectic sound like no other.  Their unique style even caught the attention of, pop music superstar, Justin Timberlake who asked the band to open for him during his Australian and New Zealand fall 2014 tour.  This was quite an achievement for an unsigned and unknown band.

Despite touring with an “A-List” artist, these everyday guys from Orange Country, California (with Polynesian roots) remain humble, down-to-earth and grateful for their success.  The band interacts with their fans on social media and keeps them updated about upcoming tours and music.  Recently, we chatted with the Common Kings to discuss their story, music, opening for Justin Timberlake, their upcoming album and much more.

You guys have had so many hits over the past four years and have achieved so much since Common Kings first formed.  For those who don’t know, how and where did the band form?

Common Kings is only 4 years old, but we actually all met at our bass player, Ivan’s (Uncle Lui) house a few years before becoming Common Kings for a jam session and never looked back since then…

Out of your entire catalogue, what’s the band’s favorite song to perform live?  Also, which song do your fans always expect you to play?

We really enjoy playing all of our songs, but probably the most fun to perform live is “No Other Love” the energy from the fans during that song adds an experience all on it’s own during that song.

Do you guys have any interesting “pre-show rituals” to get you psyched for your performance?

We pour hot wax on each other’s chest then towel whip each other till one of us gives up… (laughs) just kidding!! We actually go over the set, stretch, give a prayer of thanks to our heavenly father for blessing us with another opportunity to do what we love for those that we love.

Speaking of live shows, you recently toured with Justin Timberlake in Australia and New Zealand during the fall of 2014.  What was your “20/20 Experience” like?

We opened for him and what an experience that was for us!! As expected with somebody of Justin Timberlake’s caliber, the production was massive!  Almost 100 (maybe more) traveling crew members (production, lighting, musicians and dancers) and over 200 local hires at each city and venue.  Obviously it was nothing like we’ve ever experienced before.  We were expecting a massive scale production of course, but what we weren’t expecting was how welcoming and down to earth Justin and his entire crew was with us.  For a superstar to first allow an unsigned, unknown band to be his opener then to make sure we were treated like family was an incredibly humbling experience, something we will never forget for as long and as far as this journey that we are on takes us.

Will you guys be on tour soon?  If so, with who and where can your fans find more information?

Yes!!  We just finished the 1st week of our “America’s Most Wanted Spring Tour” and are about to join our brothers SOJA for 5 dates.  All of our tour dates can be found here; https://www.facebook.com/commonkings/app_123966167614127

In the past, you’ve collaborated on songs with J Boog, Fiji and Jay Keyz.  Which other artists would you like to collaborate with in the future (can be of any genre)?

There are many talented Polynesian reggae artists.  Why is reggae so popular in the Polynesian community?

Well we have Uncle Bob to thank for that!! Coming to Hawaii and bringing a message and a musical style that matches perfectly the mentality and swagger of the Polynesian community.  Polynesians identify with Reggae the way they do with Hip Hop and R&B … the message of non-conformity, love and from the bottom to the top ideology mixed with a musical style you can vibe out to, dance and drink to (laughs)!!

Despite its popularity around the world, reggae has always been an “underground” musical genre in the USA.  Apart from the success from bands like MAGIC!, do you think reggae artists and bands will ever reach the success of the current pop artists in America?

What’s next for the Common Kings?  Do you have any upcoming singles or albums in the works?

Yes!! Our album is being finished and being prepped for release very soon!!!

Is there anything else you’d like to your fans to know?

Check out our tour page because we are currently on tour and might be in your backyard!!

“Wade in Your Water”

3 thoughts on “From Jamming at Home to Touring with Justin Timberlake: Our Interview with American Reggae Band The Common Kings”