Hirie is one of Hawaii’s brightest breakout stars of 2013. Her debut album is available now on iTunes!

In the last year or so, Hawaiian artists have emerged onto the reggae scene in full force.  Musicians such as The Green, J Boog and Anuhea have attracted attention from the reggae community across the world and have even lead to collaborations with prominent Jamaican artists like Tarrus Riley and Peetah Morgan.

Hawaii’s newest artist, Hirie, is certainly no different.  Although she was born in the Phillipines and raised in Italy, Hirie spent most of her of life in Oahu, Hawaii.  On her brand new debut album (VP Records Associated Label Group – VPAL), she mixes her silky, smooth voice with roots, reggae and pop to create her own unique style.  Unlike many solo reggae artists, Hirie records with a live band as opposed to using pre-recorded mixtape “riddims”.  This organic feel and sound truly sets Hirie apart from most singers in her genre.  Recently, we got a chance to speak with Hirie about her album, reggae’s popularity in Hawaii and much more!

On set for her new music video “Sensi Boy”

Congrats on your debut album!  What is your favorite song on your album and why?

Thank you!  It’s hard to say!  At the moment, my favorite song is “Lost and Found”.  I really enjoy the vibes and the way it makes me feel when I listen to it.

How did your musical career begin?  When did you discover you could sing?

I sang at a very young age, maybe three or four.  My parents always said they knew I could sing because I would passionately belt out a Whitney Houston song; I began singing at home, in my basement, along with my Barbie karaoke machine (laughs)!

Which of today’s reggae artists are your biggest influences?  What do you like about them?

One of my favorite and most influential reggae artists is Tanya Stephens.  I admire her ability to write music and sing about absolutely anything she wants, with no fear of consequence -no boundaries, that lady!  I love it!  I also find influence in Damian Marley, Tribal Seeds, Rebelution, SOJA, Matisyahu and more.

Where do you gather inspiration for your lyrics?  What’s your song writing process like?

Hirie records with a live band, rather than singing over mixtape “riddims”.

I take my inspiration from personal accounts or those of others.  If a friend tells me a story that inspires me, I’ll use it as foundation for a new song.  My songwriting process starts with chords; I always try to find chords that strike me and put me in the mood to write. Once I find them, I just keep playing them until words come out.  That’s usually how I write.  Lately, I’ve been using my good friend, and saxophone player, Chris Hampton’s help with chords.  He will come over and jam with some really unique chords and I’ll freestyle to it until I come up with something worth writing down.

What genres do you find blend the best with reggae?  Are there any world music genres that you would like to experiment with?

I think reggae is so universal and can blend with anything.  Because I feel I bring a pop-side to my reggae songs, I am most interested in blending those two genres together.  I would love to experiment with dancehall and folk music.  I’m open to anything, really!

How did reggae music become so popular in Hawaii? 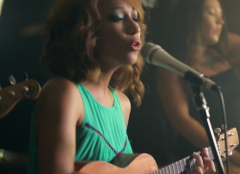 Jammin’ on the uke!

I can’t honestly say I know the answer to this, but I know that reggae really affects us islanders because we can relate to the way reggae musicians preach about life; our Hawaiian lifestyle is very similar; we take things slowly and positively, it’s always about outward thinking.  Bob Marley has a huge influence on the islands and I think reggae music by other musicians follows in the same way.

If you could collaborate with any artist regardless of genre, who would it be?  What kind of song would you have in mind?

I want reggae to be more apparent in mainstream music, so I would love to connect with someone like Bruno Mars or Rihanna who can help put reggae on the map in a great way.

Where can your fans see you perform live?  When will you be on tour?

You can catch me on the Tribal Youth Tour this fall!  October 9- November 27th.  We will be touring across the whole U.S!

Is there anything else you would like people to know?

I am just very grateful for all the opportunities that have been given to me this year and want people to know I am thankful for the support as a new artist on the reggae scene.  I want to spread positive, good vibes and hope to be around for a long time.

The beautiful Hirie on set of “Sensi Boy”

*All Photos courtesy of and provided by Hirie

Watch Hirie’s music video for her debut single “Sensi Boy”.  Also, be sure to listen to her other songs “Wiseman” and “Smile” from her debut album (available on iTunes)!  What do you think of Hirie?  Comment below!

4 thoughts on “Hawaii’s Newest Pop-Reggae Artist: Our Interview with Hirie”