J Boog has gained popularity across the world

When you collaborate with famous artists like Tarrus Riley and Peetah Morgan (of Morgan Heritage), you know you’ve reached reggae super-stardom.  If you haven’t heard of J Boog yet, then you’ve been missing out.  He blends both Hawaiian and Jamaican reggae to create his own tropical style. Not only has Boog gained respect amongst the reggae elite, but he has also gained popularity all over North America, the Caribbean and Oceania.

J Boog was born in Long Beach, California, but grew up in the rough neighborhood of Compton, CA.  His loving family kept him in line and off the streets by instilling a strong awareness of Samoan culture and tradition.   He was soon to discover music at an early age and it would change his life forever.

J Boog and Fiji jamming together

songbook and introduced him to the world of reggae.  A spark ignited inside him; he found his true passion and immersed himself in Jamaican music.

From 2005-2006, J Boog’s musical career became serious after moving to Hawaii to meet his idol, George “Fiji” Veikoso.  The

two worked intensely on his debut album, Hear Me Roar (2007) that featured Fiji on various songs.  After the record’s completion, Wash House Music Inc. (an indie label based in Hawaii and San Francisco) signed Boog onto their label.   The album gained notoriety amongst Hawaiian listeners, but Boog’s turning point was just around the corner.

J Boog and Peetah Morgan in the video for “Sunshine Girl”

In 2008, J Boog went to Jamaica to meet Gramps Morgan of the legendary reggae band, Morgan Heritage.  They immediately

connected and began recording at prominent locations such as Bob Marley’s “Tuff Gong” Studio.  This significant event shaped the authentic Jamaican reggae sound for his most recent album, Backyard Boogie (2011).  Boog scored big with the album’s debut single, “Let’s Do It Again”; it blazed the Jamaican music scene and spread to the San Francisco Bay area.  The song’s combination of lover’s rock and dancehall rhythms made it an intense club and radio hit.  Boog followed with the successful ska number, “Sunshine Girl” (featuring Peetah Morgan) and a catchy rockers tune, “She Give Me Lovin’” (featuring Tarrus Riley). 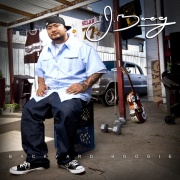 In the spring of 2012, J Boog was featured on the “Live in Love” Riddim Mixtape (TJ Records). His song, “Love Me”, blended nicely with tracks from heavy hitters like Alaine and Gyptian.  Although the track didn’t have much mainstream exposure, it secured his place among Jamaica’s finest lover’s rock crooners.

Today, J Boog continues to win over fans for his uplifting lyrics of love.  Wherever he goes, J Boog makes a lasting impression on audiences across the world.   His passionate vocals and positive energy truly reflect the spirit of reggae music.

*All photos courtesy of J Boog and VP Records